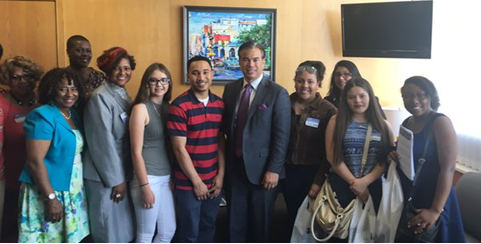 Sincere gratitude to Oakland / Berkeley Assemblymember Rob Bonta's office for serving as our Capitol host for the day and Chief Clerk Dotson Wilson's office for our educational collateral.

See you all next year!

ADDRESSING THE HOUSING CRISIS IN CALIFORNIA

AB 2441 - Workforce Housing in Pilot Program [Thurmond]
AB 2441 will create a new state investment in cities for the development of housing in high-cost areas. The bill will create a pilot program that will provide funds to cities in high-cost areas, to be used for either down payment assistance of a home or the development, substantial rehabilitation and preservation of multifamily housing.

AB 2756 - Oil and Gas: Operations [Thurmond and Williams]
This bill will enhance the Division of Oil, Gas, and Geothermal Resources’ (DOGGR) authority to regulate the oil and gas industry, and ensure the protection of public health and the environment.

AB831 - Student Financial Aid: Cal Grant Program [Bonilla]
College Tuition Waiver
This bill would change, in accordance with a prescribed formula, the maximum Cal Grant awards for students attending private nonprofit postsecondary educational institutions, commencing with the 2015–16 award year. The bill would impose requirements on private nonprofit postsecondary educational institutions to provide specified data to a specified association as a condition for the funding of Cal Grant maximum awards to their students, and would require the association to report on that information to the Legislature, the Governor, the Department of Finance, and the Legislative Analyst’s Office.

AB 2498 - Human trafficking [Bonta]
AB 2498 will help to support the security and safety of trafficking victims by ensuring their identity is kept confidential at the outset, instead of expecting a victim to opt-out of having their identities revealed. The bill also provides guidance to county courts to hear time-sensitive cases quickly, thus sending a clear message to traffickers that justice for these victims is a top priority.

SB966 (RISE Act) - Repeal Ineffective Sentencing Enhancement Act [Mitchell]
This bill would reduce racial disparities in the criminal justice system, restore balance in the judicial process, and free up funds to be invested in communities. Existing law imposes on a person convicted of a violation of, or of conspiracy to violate, specified crimes relating to controlled substances a full, separate, and consecutive 3-year term for each prior conviction of specified controlled substances crimes, including possession for sale and purchase for sale of opiates, opium derivatives, and hallucinogenic substances. This bill would repeal those provisions.